Including apologies to Monty Python. Of course it isn’t true. It is really more of the same.

I still have not received the mysterious envelope of the last posting. Maybe the anti-terrorists at the USPS have decided to keep it for their hall of shame. Maybe they just cannot find me now that I am on the lam. {*grin*} (That is what they get for calling and warning me.)

Then there is the weather. After a dry and warm January with many days in the 50s, February has been cold and snowy with many a snow storm and all sorts of cold. But at least today it started a fast melt. This is the view on the back patio as the snow begins to melt and re-freeze. 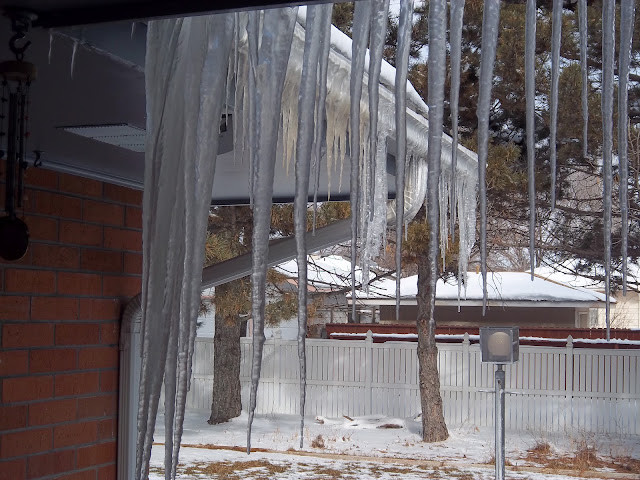 ShovelingÂ the snow from last nights flurries sounded like I was working in a waterfall as the snow started melting off the roof. Â It was kind of neat.

That brings us to Valentine’s Day tomorrow. L and I have never been real big celebrants of the holiday. Usually just a card with the occasional meal out or flowers or … Given that this will be the 40th Valentine’s Day we have celebrated as a couple, we’ll undoubtedly do the same old things.

One of the reasons we don’t get too excited about February 14th is that my birthday is on the 17th and L’s is 5 days later. So we tend to get excited later in the month.

One thought on “And Now For Something Completely Different …”